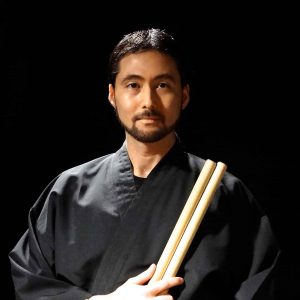 TAIKO TUESDAY concerts promise loud, energetic performances that combine music, dance, culture, and pure athleticism. “So many people I meet have no idea what taiko drumming is, or that we have such a vibrant local taiko community. These concerts are free – an easy opportunity for people and families to give it a try. Plus, our guest artists are some of the best in the world– they are going to blow people away!” says Jennifer Weir, executive director of TaikoArts Midwest.

Eien Hunter-Ishikawa is a musician and educator based in Portland, Oregon specializing in drumset, taiko, percussion, and shinobue. Born in Japan, his passion for drumming started at an early age through the involvement of a youth taiko ensemble directed by Saburo Mochizuki, a founding member of Tokyo’s pioneering taiko ensemble Sukeroku Daiko. He earned his Master of Music at the University of Hawaii at Manoa, and performed and toured extensively as a member of the Kenny Endo Taiko Ensemble. Eien is a current member of contemporary taiko quartet On Ensemble, and continues to write new compositions for the group.