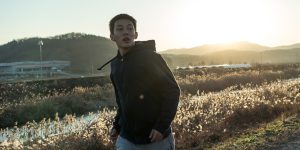 Ah-in Yoo as Jongsu in “Burning.” (Photo courtesy of TIFF)

TORONTO (Sept. 12, 2018) — “Burning” is a film adaptation of the short story “Barn Burning” by the popular Japanese writer Haruki Murakami, the translated version first published in the November issue of “The New Yorker” in 1992.

Acclaimed Korean director Lee Chang-dong has fleshed out the minimalist narrative of Murakami’s story and created an extended ending, turning “Burning” from mere rumination into a dramatic suspense thriller, shedding traces of a myriad of literary allusions. That is the appeal of the works by the novelist-turned-filmmaker.

Winner of the FIPRESCI Prize and a nominee for the Palme d’Or at Cannes this year, “Burning” had its North American Premiere on Sept. 9 at the Toronto International Film Festival. As well, South Korea has announced recently that “Burning” will be its official entry to the Best Foreign Language Film race at the 91st Oscars in 2019.

More than fifty years before Murakami’s short piece appeared in “The New Yorker”, back in 1939, a short story of the same name, “Barn Burning”, was published in Harper’s magazine. Its author was William Faulkner. It was a dramatic story of class discrepancy in the American South, the chasm between the rich and the poor and the hateful revenge of a tenant farmer burning down the properties of his land owner. Interesting to note that Murakami made no mention of Faulkner in his story, which can be seen as a modern-day version of the American author’s work. 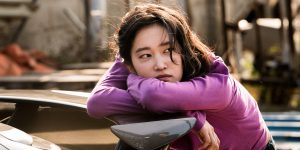 Jong-seo Jun as Haemi in “Burning.” (Photo courtesy of TIFF)

Director Lee’s adaptation shares a similar vein of meaning-imbued elements as his last feature “Poetry” from eight years ago. While his previous work is a character study of a grandmother trying to seek out a way to renew her life, in “Burning”, Lee focuses on the young, specifically, the millennials, and contrasting the social chasm between the rich and the poor with two characters.

Jongsu (Yoo Ah-in) graduated from university majoring in creative writing. At present he is doing menial jobs as a living while trying to write a novel. On a delivery one day he comes across an old schoolmate, Haemi (newcomer Jun Jong-seo), working as a raffle promoter on the street. She recognizes Jongsu as according to her, they used to live in the same village when they were children. That brief encounter sparks off a precarious relationship between the two.

Due to some legal entanglement of his father’s, Jongsu has to leave the city to return to his father’s impoverished farm to look after it. He sleeps in a run-down shack, drives a rusty truck and clears the waste of the only cow left. At the same time, Haemi is going on a trip to Africa, and has asked Jongsu to go to her small apartment to feed her cat while she is away. This he gladly obliges.

But when Haemi returns after some time, she brings with her another man, Ben (Steven Yeun), a third person to the intimate relationship Jongsu has wanted to establish with Haemi.  Ben is more than just a disruptor but an enigma. He lives in a high-end apartment, dresses stylishly, drives a Porsche and exudes sophisticated tastes. He does not hold a job nor seem to mind Jongsu’s presence, but invites him home and brings him into his circle of friends. “The Gatsby in Korea” as Jongsu figures him, Ben is a man with a mysterious past and unsearchable intention. 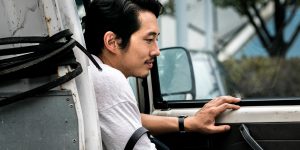 Things become more intriguing and uncomfortable when one night, Ben confides in Jongsu that he burns greenhouses for his own pleasure. He would scout out his target, and set fire to it while watching from afar. The next one he has in mind actually is quite close to where Jongsu is staying, near his father’s farm. Here we see Murakami’s interesting flip of Faulkner’s story. Instead of a hateful man from a lower economic class driven by jealousy and bitterness to commit arson, we have the resourceful rich burning down greenhouses, but for what reason?

Unlike Murakami, Lee alludes to Faulkner, but also takes up Murakami’s suggestion that it is not only poverty or revenge that drives one to commit incendiary acts, but ennui, self-indulgence, or mere emptiness can also prod one towards inexplicable behavior.

Steven Yeun, the Korean-American actor known for the TV series “The Walking Dead”, takes up his first major role in a Korean film. Yeun’s portrayal of an amoral, metrosexual may well be a literary, modern-day version of Camus’s ‘L’Etranger’, ‘The Stranger’.  His often expressionless, but not unpleasant, face could well have conveyed the inner psyche of a rootless and purposeless existence.

One time at a social gathering, Haemi imitates the African ‘hunger dance’ in front of Ben and his friends, silent gestures showing the ‘little hunger’ of the literal, physical pang changing to the ‘great hunger’ with her arms reaching upward and swaying to signify the empty soul in search for fulfilment. Ben’s response is a yawn and a slight smile when Jongsu catches his bored reaction. Then a quick cut to a loud, electrifying night club scene with Haemi dancing wildly in a smoky, hazy atmosphere. Lee’s cinematic storytelling is stark and to the point.

The director’s rendering of passion and the human psyche is enhanced by Hong Kyung-pyo’s mesmerizing cinematography and the engaging score by Mowg and other incidental music, presenting sequences that are at times dreamlike, and at times, sadly realistic.

The plot thickens towards the last section when Jongsu tries to connect with Haemi after some time but finds her missing. Her apartment has been vacated, her phone disconnected. The next time he sees Ben, Ben is with another woman and admitted no knowledge of Haemi’s whereabouts. The disappearance of Haemi ignites Jongsu’s suspicion and drives the tension towards an explosive denouement which Lee adds to Murakami’s short story. It is an ending that is a surprise and yet also natural in context. Lee brilliantly brings his viewers full circle back to Faulkner with his layered storytelling.

Just like his previous works “Poetry” and “Secret Sunshine”, Lee has shown once again that he is not only a masterful director but an astute observer of human psyche and behavior.