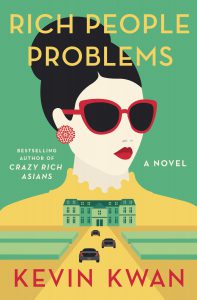 Is there an app for this? Thirty plus characters, three family clans, full descriptions of what and who they wear from head to toe whenever they appear and not repeating, what they drive, or driven in, or flown in, the restaurants they frequent, the cuisine they consume, the places they shop across two continents, Europe and Asia. Not to mention their residences, the designer of every element in the mise-en-scène, from floor to ceiling, the ornate furnishing, the paintings on the walls, originals of course. Tyersall Park in Singapore, nestled in 40 hectares (close to 100 acres) of prime, secluded, urban land where the Young matriarch Shang Su Yi enthrones makes Downton Abbey look like a humble country abode.

But having read page after page of extravagant, designer sculpted haute life-style of the upper crust, one would likely prefer a quiet country abode. If not for the buried treasures–the two sane protagonists Rachel Chu and Nick Young–dispensing a dose of healthy values and embodying the triumph of true love, Kevin Kwan’s “Crazy Rich” books could likely be rendered immaterial and merely superfluous farce.

Born in Singapore, Kwan came to the U.S. when he was eleven years old. After obtaining a creative writing degree from the University of Houston, he moved to Manhattan to pursue a BFA at the Parsons School of Design. His detailed descriptions of the places, foods, arts, architecture, and lifestyle of the affluent in Singapore, Hong Kong, China, Paris, and London reflect personal, first-hand experiences and knowledge. However, separating facts and fiction can be an elusive task for his readers. So be it. Just fasten your seat belt and enjoy the wild ride.

With his debut novel “Crazy Rich Asians” (2013), we are introduced to two sane and rational academics in Manhattan, Rachel Chu, an economics professor and her colleague at NYU, history prof Nick Young. Unbeknownst to Rachel, a Stanford alum raised by a single mother in California, her boyfriend Nick is Mr. Darcy incognito. Nick is actually Tyersall Park matriarch Su Yi’s grandson, born in extreme wealth, Oxford educated and accented, the only third generation male descendant that carries the Young family name.

In the first book we see Nick bringing Rachel back to Singapore to attend his best friend Colin Khoo’s wedding, finally revealing the embarrassing secret that he comes from a filthy rich family, and subjecting Rachel to the opposition of his formidable grandma Su Yi and mom Eleanor, and the snooty judgement and covert operations from Eleanor’s lady friends to put her in her place. The two lovers overcome all obstacles, death threats and unreal adventures covered in the second book “China Rich Girlfriends” (2015).

“Rich People Problems” (2017) wraps the trilogy with the passing and funeral of the matriarch Su Yi. What is to be expected is the hot pursuit of the Young family inheritance, and revealing the mystery of who the new owner of Tyersall Park will be. The land with the old mansion sitting on it now worth billions of dollars.

Su Yi is an enigmatic figure who doesn’t like to flaunt her wealth but spend her fortune where it’s necessary. “She makes her cook save money by buying the discounted, three-day-old bread from the supermarket, but she’ll spend $30,000 on plastic surgery for her pet fish,” recounted her granddaughter Astrid. Actually, only after Su Yi’s death do her descendants discover the secrets of her past life in Tyersall Park during the Japanese occupation of Singapore in World War II. Further, a departure from his satirical exaggerations, Kwan’s narratives of Su Yi’s mental drifting back to her younger days give us a different flavor of his storytelling, more serious and absorbing. I’d like to see Kwan attempt that style after this trilogy of satire.

Another storyline belongs to Astrid, Nick’s cousin, daughter of Su Yi’s eldest daughter Felicity and her husband Harry Leong. Based in Singapore and Paris, Astrid is urbane, fashionable, and endowed with an exquisite, and expensive, taste but with a rare form of humaneness as well. She and Nick grew up together and have stayed as best friends in the family. In this final installment of the trilogy, Astrid has to deal with a dirty divorce from Michael Teo and tries to re-connect with her first love Charlie Wu.

At her deathbed, the stake holders of Su Yi’s fortunes show their true colors. The most colorful has to be Eddie Cheng rushing to her bedside from his home in Hong Kong. The ostentatious son of Su Yi’s youngest daughter Alix puts on a show of artificial tears to impress and appease. Knowing Nick to be his prominent rival, he even tries to block him from entering Tyersall Park.

Nick, estranged for a few years due to his grandmother’s opposition to his marrying Rachel, now returns to Singapore to seek reconciliation before time runs out. Although as the rightful heir following the line of his father Philip Young, the only son of Su Yi’s, inheritance is the furthest thing from his mind. He has come back to reconcile but ends up having had to deal with the future fate of the estate; his father Philip would rather go fishing in Sydney and stay far from the madding crowd. In a sequence of unexpected events that unfolds like a mystery, an ingenious idea comes to Nick that leads to a satisfactory wrap for the historic home as the book ends. Indeed, like a Jane Austen novel, Kwan’s denouement deftly ties all loose ends and love knots.

“Rich People Problems” is a timely wrap to the trilogy as Kwan’s bestselling debut “Crazy Rich Asians” is now being adapted into a Hollywood movie. Director Jon M. Chu (“Now You See Me 2”) makes sure the cast is authentically Asian. Constance Wu of “Fresh Off the Boat” plays Rachel Chu and international star Michelle Yeoh as Nick’s mother Eleanor. “Dr. Ken” Ken Jeong is also on board. Nick will be played by Henry Golding, an actor who has an alchemic background from Singapore, Malaysia, and England, as close to a Nick Young as director Chu could find, particularly the accent. The movie will be released in 2018.