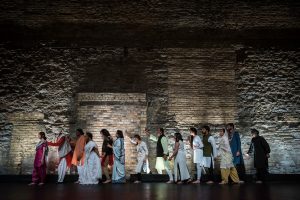 MINNEAPOLIS (March 31, 2017) — Artists from diverse backgrounds, countries, genders and faiths gathered in March at Pangea World Theater’s studio to start off rehearsals for their upcoming spring production of “5 Weeks” all set to run Friday, April 7, 2017 through Sunday, April 23 at The Lab Theater, 700 North 1st St., Minneapolis.

This original script by playwright Meena Natarajan, composed of narrative and original music, evokes the history of the 1947 partition of British India and the effect it had on the generations that followed. The script will be brought to life by a unique ensemble made up entirely of members from the local South Asian community. “This is groundbreaking in itself,” explains director Dipankar Mukherjee. “I am so proud to be a part of bringing all these sensibilities together.”
Performances run April 7th – 23rd at 7:30 p.m. Thursdays through Saturdays, and2:30 p.m. Sundays. Tickets are $18 general admission, $15 groups of ten or more, and $12 for students and seniors. For more information visit our website, www.pangeaworldtheater.org. Reserve tickets at thelabtheater.org and 612-333-7977.
Inspired by personal narratives and short stories about partition, 5 Weeks brings to stage the stories of Hindus, Muslims, Parsis, Anglo-Indians, and the fate of women and children abducted during the partition of India and Pakistan. Set at this pivotal moment in South Asian history, this play journeys through a complex web of narratives, bringing to life those forced to flee what they once called home, the pressures to choose allegiance, and the desperate search for compassion in a time when humanity hung in the balance. 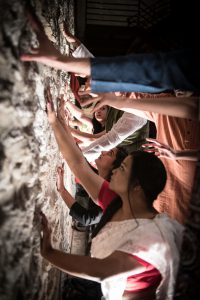 Stage manager Suzanne Cross noted, “Regardless of differences, everyone is completely united in their enthusiasm, determination and drive. The whole ensemble is so trusting and open to the process.”
The ensemble began rehearsals by sharing stories of their grandparents, parents, and elders, exploring the silenced history of Partition through the memories and oral documentation passed down through their families. “It is important to look at the cultural, social and psychological effects of Partition,” notes Mukherjee. “We are moving forward, understanding how the past has affected the present, while simultaneously looking back at our own silenced history and creating a healing space through the telling of these stories. Rehearsal is an authentic, rigorous, fragile and sacred space where we are gradually unfolding our common past with sensitivity.”
Playwright Bio
Meena Natarajan is a professional playwright whose scripts have been professionally produced both in India and the U.S. She has created, written and performed in stage and street theater pieces in India raising issues such as social injustice, corruption and dowry deaths. She is deeply inspired by larger mythological themes and poetry and has adapted texts such as The Egyptian Book of The Dead, 2000-year old love poems from India and large events such as the partition of India and Pakistan. She has written several plays for Pangea World Theater including – Osiris, Partitions, The Inner World, and has co-adapted Rashomon. Her last play was No Expiration Date in 2015 dealing with aging and sexuality. From 2000-2003, she served as the President of Women Playwrights International, an international organization promoting the work of women playwrights, and convened the 7th Women Playwrights International Conference in the Philippines in 2003. She recently was awarded a Visionary Leadership award from the Minnesota Council of Non-Profits in 2013. Natarajan served on the Board of the National Performance Network and the Network of Ensemble Theater and is currently on the board of the Consortium of Asian American Theaters and Artists. She is a National Theater Projects Advisor of the New England Foundation for the Arts.
Director Bio
Dipankar Mukherjee is a professional director originally from Calcutta, India with a 25-year history of directing. He is the Artistic Director of Pangea World Theater, an international theater in Minneapolis that is a progressive space for arts and dialogue. As a director, he has worked in India, England, Canada and the United States. Dipankar has worked at the Guthrie Theater, Great Lakes Shakespeare Festival, New World Theater, Alliance Theater and at the Young Vic in London. His aesthetics have evolved through his commitment to social justice, equity and deep spirituality and these factors, along with a response to relevant politics, forms the basis of his work. Dipankar has been awarded the Twin Cities International Citizens Award by the Cities of Minneapolis and St. Paul for contributions in the area of human rights and international co-operation. Dipankar has received the Humphrey Institute Fellowship to Salzburg and has been a Ford Foundation delegate to India and Lebanon. He is a recipient of the Bush Leadership Fellowship award to study non-violence and peace methodologies in India and South Africa. He was an Artist-in-Residence at Shangri-la in Honolulu, HI in 2015. He has a long lasting relationship with the South Asian community and has created community based work bringing Indian, Pakistani, Bangladeshi, Sri Lankan communities together in a way that foregrounds social justice and equity.
Composer and Musicians Bios
Dr. Pooja Goswami Pavan is a multifaceted performer, composer, teacher and scholar of Hindustani (North Indian classical) vocal music. The versatility in Pooja’s repertoire is evident in her consummate ability to sing Khayal, Thumri, Dadra, Ghazal, Bhajan, Sufi and folk inspired forms of North India, such as Hori, Kajri and Chaiti. Trained initially by her father Pandit Surendra Goswami, she received advanced training in Khayal from Prof. Ajit Singh Paintal and her elder brother Dr. Shailendra Goswami. Pooja received a PhD from the University of Delhi for her research on the body of work of Pandit Amarnath – the prime disciple of the iconic vocalist Ustad Amir Khan. She developed her expertise in semi-classical vocal music under the tutelage of the eminent vocalist Vidushi Shanti Hiranand – the reigning queen of Thumri and Ghazal and the universally acclaimed successor of the legendary vocalist, the Late Begum Akhtar. A recipient of multiple prestigious National Scholarships in India, Pooja has performed and lectured extensively at prominent venues and academic institutions in India and the USA. She has taught several courses in Indian music and culture at the University of Minnesota and Macalester College since moving to Minnesota in 2006. Pooja has three CDs to her credit featuring her original Sufi, Ghazal and Bhajan compositions. Pooja has been a past recipient of multiple grants from the Minnesota State Arts Board, the Metropolitan Regional Arts Council and the American Composers Forum. Her growing collaborative footprint in Minnesota includes several original works and performances for premier arts groups such as Ananya Dance Theater, Katha Dance Theater, Pangea World Theater and Cedar Cultural Center and multiple concerts with leading performers of Jazz, American-Folk and Middle-Eastern music. She is the recipient of the prestigious McKnight Fellowship for Musicians for 2016-17, awarded by the McKnight Foundation in Minnesota.
Dr. A. Pavan is a regular figure in the Twin Cities’ (Minneapolis-St. Paul) music circles as a Tabla player and teacher. He has studied with several masters and presently trains with Ustad Shabbir Nisar and Sri. Rajendra Nakod. He has performed for several premier music, dance and theater groups in Minnesota in their productions and concerts. Dr. Pavan also appears on recordings of world/fusion music with many MN based artists. Since 1999, Dr. Pavan has provided Tabla instruction to well over 200 students. He has also been a very active presenter and promoter of Indian classical music in Minneapolis-St. Paul, MN, currently serving as an Advisor to the Indian Music Society of Minnesota (IMSOM).
About Pangea World Theater
Pangea World Theater illuminates the human condition, celebrates cultural differences, and promotes human rights by creating and presenting international, multi-disciplinary theater.

Pangea World Theater is a progressive space that brings thinking artists from very diverse backgrounds and ethnicities together to create art for a multiracial audience. As we create work at this particular time in history, when cultural and political divides are rapidly shifting, Pangea offers itself as a place where a mutual respect for differences amongst our artistic collaborators exists, not merely a tolerance for diversity. This is a core value of our artistic vision.
Our creative cosmology can be represented by a circle where the participating artists inhabit an indispensable space in the circumference, and only the “work” lies at the center. Our aesthetic is enriched by the journey of exploration to and from that center energized by intercultural dialogue, the memories and experiences that artists bring with them, different styles and traditions and the creative process itself. This aesthetic is not fixed; it includes the voices and artistic visions of multiple voices and realities. Pangea’s art form is influenced by both western and non-western vocabularies and styles in a complex way.

Pangea begins from the fundamental paradigm of diversity in the world. Our work expresses this reality and our organization advances this possibility consciously. Our strategic vision is to build strong alliances across a broad spectrum of artistic and human rights organizations in order to create a powerful collective foundation for work on and off-stage that fully merges alternative and marginalized voices into the mainstream.

Since 1995, Pangea has worked to create and present new possibilities and new aesthetic realities for an increasingly diverse audience. Our artistic direction evolves out of relevant shifts in the social, cultural and political pulse of the communities in which we live and work. We bring artists together to confront stereotypes, push the boundaries of their art forms and challenge audiences with diverse perspectives and aesthetic. Each season Pangea produces, commissions and presents artistic, innovative and genre-crossing works, challenging the expectations of our artists and audiences.
Share