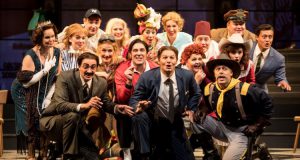 The cast of “Don Pasquel” a Minnesota Opera production on Saturday now performing at The Ordway Center for Performing Arts.

ST. PAUL, Minn. (Oct. 7, 2017) — The story of a fading star fighting the transition of Hollywood from its golden era — as an opera sung in Italian was an impressive and entertaining first opera experience with the opening night performance of “Don Pasquel” a Minnesota Opera production on Saturday at The Ordway Center for Performing Arts.

Craig Colclough as Don Pasquel, Susannah Biller as Norina, David Walton as Ernesto, Andrew Wilkowske as Dr. Malatesta, William Clay Thomson as the Notary and Ian Christiansen as Max performed elaborate and complex vocal runs that were described as the most virtuous aspects of the opera by some long time opera patrons at the St. Paul Hotel After Party. Using opera vocabulary the patrons raved about the range of each performer and in particular the performances of Craig Colclough and Susannah Biller who received a standing ovation.

The performers, the orchestra conducted by Johathan Brandani and the set design was impressive and fitting for Minnesota Opera celebration of its 55th anniversary with the season opener. It felt like old Hollywood with beaming lights and eclectic fashion. From perfectly pressed tuxedos and sequin filled evening gowns to striped blue hair and high 70’ Go Go boots. It was a sold out performance. 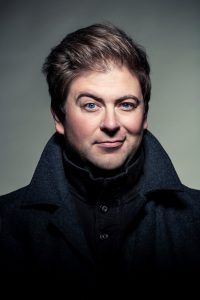 The original 1843 version of Don Pasquel with music by Gaetano Donizetti and the libretto by Giovanni Ruffini followed a similar storyline that is updated to 1950s Hollywood in this Minnesota Opera production. I was taken in by the back drop of old time cinema with black and white scenery. Colclough’s magnanimous and deep baritone voice was both delightful and mesmerizing. Sung in Italian with some English and sub titles, I understood quickly why Don Pasquel was marketed as an opera for first timers as well as seasoned ticket holders.

Colclough plays an aging Hollywood star who was entangled in an emotionally stressful and romantic relationship. Combined with family betrayal, Colclough portrayed the essence of Pasquel with verismo and humor. The story of Don Pasquel unfolded, which underscored life long lessons of what can happen when we are unable to forgive and let go of relationship betrayal. Both Acts I and II were a series of tumultuous trials for Pasquel to attempt resolving. 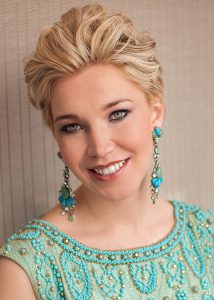 Susannah Biller played the cunning and malicious character, Norina. Biller’s soubrette and breathtaking soprano voice filled the theater with opera so beautiful and pleasing that it’s hard to describe. Colclough and Billers created multidimensional moods through harmonious opera, full of havoc and love.

Despite being a neophyte, I fully appreciated the live opera experience with incredibly gifted singers portraying tragic characters with a full range of emotion to include humor. The story of Don Pasquel reveals a relatable story of love, loss, betrayal and healing.  I was afraid that I would not understand the content but my heuristic ideas were unfounded and biased. I feel much more open.

Opera narrates important stories that are manifested through incredible song, talent and musicianship. There’s no doubt about it. I have a lot to learn. My take away from Don Pasquel is that being open to learning is something to be enjoyed versus feared. Magnificent from beginning to end this opera met me where I was. Despite being the novice among seasoned ticket holders this performance planted a seed of appreciation for opera and I am grateful.