Over the years Works-In-Progress and Isolated Acts – the venerable programs that comprise the festival – have served as artistic incubators for more than 300 pieces in a range of disciplines including: dance, theater, movement theater, puppetry, music, and new multidisciplinary forms where disciplines intersect and transform.  The festival provides emerging artists with a platform to bring new ideas to light and audiences with the chance to be introduced to fresh work by some of the area’s most exciting up-and-coming artists.

WORKS-IN-PROGRESS 2018 opens the festival, May 24–27.  For five months the WIP artists have received full access to the theater, technical support, as well as feedback from their artistic peers as they develop their pieces. The process culminates in four public performances: a high-energy, delightfully diverse evening featuring a 15-minute excerpt from each of the five selected projects. fitter perception is an examination of the fallibility and inscrutability of perception, using a projection of a computer desktop as stage and story. Drawing inspiration from Wikipedia’s “List of Cognitive Biases,” as well as cognitive scientist Donald Hoffman’s interface theory of human consciousness, fitter perception explores the anxiety embedded in the interfaces of our everyday lives and the emotional fragments ingrained in the liminal space between minds, bodies, and machines.

What happens when matter becomes conscious of itself? In this solo performance, Anna Johnson explores point of view, scale, and self-awareness through interactive video installation and live sound. The artist unpeels layers of memory and images as she wanders her psychic space, encountering past and future selves.

The duet Scrap Meaning employs the shared abstract capacities of dance and poetry to seek an elusive ineffable understanding. Through research into the poetics of words and space – relying on both intuitive and external logics it proposes a world where confusion is satisfyingly articulate.

USWE(I) by Arneshia Williams
In USWE(I) dance-maker Arneshia Williams weaves together movement, sound and spoken word to examine concepts of inclusion and exclusion, self and community, and where physical and spiritual realms intersect. Employing a distinctive fusion of African diasporic and contemporary dance forms, Williams leads us on a journey where historic and present day challenges give rise to a determined hopefulness.

New Works 4 Weeks continues through June 19 with the ISOLATED ACTS portion of the festival, featuring the premiere of six pieces in a series of three different double-bills.

A Double Bill: The Speculative Sentence by Sharon Picasso Anat Shinar in Here’s How (Refuted), May 31, June 1-2-3 on a split bill with Sharon Picasso. (Photo Credit: Pat Berrett)

+ Here’s How (Refuted) by Anat Shinar Sharon Picasso’s new movement work for four, The Speculative Sentence, inserts chance as a factor in what is illuminated on stage.  Using motion detector lights, hand-held light wands and other practical light sources, the piece is a fascinating study of the spaces in between – the idea that we can’t necessarily choose what we reveal or hide about ourselves, and that often what connects us with one another can be equally random. Featuring dancers Brian J. Evans, Heidi Kalweit, Jesse Neumann-Peterson and Erin Thompson.

In Here’s How (Refuted), Anat Shinar draws on a long-time obsession with self-help literature. Along with dancers Kara Motta and Kristin Van Loon, Shinar posits that minimal effort brings about maximal change, as long as one believes it can. Integrating movement, text, and installation, Shinar crafts a space in which clarity and disorientation overlap, reflecting how her struggle with anxiety manifests externally.

Sharon Picasso is a Minneapolis based interdisciplinary artist. Her creative work incorporates a background in dance, theater, somatics, music and design. She values process and cultivating an inclusive and sustaining environment. She studied acting and Psychology at the University of Minnesota-Duluth and earned a degree in Dance Performance and Choreography from The Boston Conservatory.

Anat Shinar is a Minneapolis-based contemporary performance and visual artist, curator, writer, and educator, and member of Fresh Oysters Performance Research collective. She graduated from the University of Minnesota with a BFA in Dance and a BA in Visual Arts, and completed her Master’s degree in Arts and Cultural Leadership, also at the UMN. Her choreography has been presented at Red Eye Theater, The Southern Theater, The Soap Factory, SooVAC, Bryant-Lake Bowl, and Ritz Theater.

A Double Bill: THE MONICA MEDITATIONS by Paige Collette

+ FROM BLACK WOMBS by Queen Drea 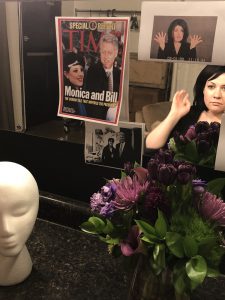 Paige Collette in the premiere of The Monica Meditations June 7-8-9, 2018, on a double bill with Queen Drea. (Photo Credit: Billy Leutzen)

According to the news section of Paige Collette‘s 1999 Catholic high school year book, “Scandal rocks the White House as President Bill Clinton is accused of perjury and obstruction of justice.  In an impeachment trial before the U.S. Senate, President Clinton is acquitted of the charges.”  While Monica Lewinsky’s name isn’t mentioned in this blurb, she’s the figure who’s captured Paige’s imagination for years.  Drawing upon cooking shows, the QVC, and music from the 1990s as inspiration, The Monica Meditations is a performance exploration of public scandal, private heartbreak, and resilience. Queen Drea is an electronic musician who creates live, scores on stage. Her latest work, FROM BLACK WOMBS, is an Afro-futuristic dystopian tale about two orphaned sisters. Having lost their parents in a revolution against white supremacy, the siblings seek to establish a new America in response to the bleak world where black men are scarce because of the school-to-prison complex and the murder of unarmed men by police.

Based in Minneapolis since 2010, Paige Collette grew up in Dallas, Texas, then moved to New York where she earned her BFA from NYU/Tisch.  In collaboration with Erin Search-Wells, she created and performed “Paige & Erin: 9/11” at the Playwrights’ Center for the 10th anniversary of 9/11.  In 2013, Paige performed original works in Queertopia and Q-Stages and from 2014-2017 she performed as alter-ago Patricia Lake in Raw Sugar’s feminist comedy showcase THE FUNNY.

Queen Drea, 2017 Minnesota Emerging Composer award-winner, is a vocalist, performance and soundscape artist whose work is most fully realized in improvisational settings, a place where her artistry thrives. When she performs her compositions, 90 percent is done live on stage, giving her freedom to enhance the piece as she is moved by the audience and as they are moved by her soundscapes and poetry. This symbiotic relationship between Drea and her audience is a key component of her creative process.

A Double Bill: The Crapture by Dolo McComb

Amal Rogers in her new solo Guriga, which closes out this year’s festival on a double bill with Dolo McComb, June 14-17, 2018. (Photo Credit: Søren Olsen)

In her new solo, The Crapture, Dolo McComb sets out on a quest to discover the space where things become their opposites. From the bottom of the cauldron worn thin by grief seeps awe. Lady Death slips on a banana peel, giving birth to a dove. Carrying all she needs with her, Amal Rogers in her solo Guriga, assembles and then packs away a warm and personal home where she can dance, eat, bathe, and rest. Guriga is a sometimes inviting sometimes private ritual of the protection and power of home.

Dolo McComb resides in the Twin Cities where she practices as a performance maker and body worker. She has worked and toured nationally with BodyCartography Project and choreographer Chris Schlichting. Her choreography has been shown locally at Bryant-Lake Bowl, Zenon Zone, the Island, Red Eye, The Southern Theater and in Walker Art Center Choreographers’ Evening.

Amal Rogers is a Somali/American dance artist and community educator who uses art as a means for personal, social and political transformation. She holds a Masters degree in dance from Mills College, is a certified bodyworker, and acts as an editor and as the Community Outreach Director for the online publication Art For Ourselves. Amal makes performance experiments to positively define her identity.

The Thursday night performance of each weekend of the festival is pay-as-able. Admission to the Fri-Sun Works-In-Progress performances is $10.00 ($8 students).  Tickets for the Isolated Acts portion of the festival – weeks 2 through 4 – are $18 ($10 students). Reservations are recommended and tickets are available for purchase online at www.redeyetheater.org or by calling Red Eye’s voicemail box office at 612-870-0309.

Red Eye is located at 15 West 14th Street, between Nicollet and LaSalle. Convenient parking is available in nearby ramps and a metered lot at 15th and Nicollet. The theater’s auditorium is wheelchair accessible.

Note: no Sunday performance this week