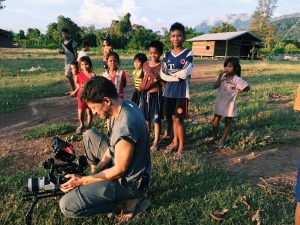 On location filming in Laos.

During the Vietnam War, the United States secretly bombed Laos more heavily per capita than any country in history, McGoff said. There are 80 million unexploded bombs remaining that continue to terrorize, kill and maim innocent Laotians today.

“My team and I are in post-production now and are currently running an Indiegogo crowdfunding campaign to help raise finishing funds,” McGoff said. “We plan on premiering in early 2019 and using the film to mass-educate Americans about the 80 million unexploded bombs in Laos using our partners, COPE, Handicap International and others.”

McGoff also saw a bigger story: the humanity of the Lao people. She said they are a resilient, optimistic and kind people and that is showcased in the film, “This Little Land of Mines.”

“I set out to make this film because I thought Lao people deserved more from the United States, and I also thought that Americans deserved to know what their country secretly did to Laos during the Vietnam War,” McGoff said. “I first fell in love with Laos as a tourist, but didn’t find out about the 80 million unexploded ordnance until years later during an academic research program.” 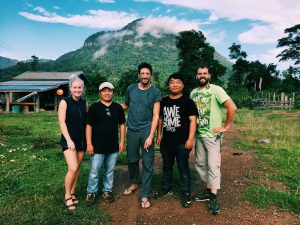 The film crew on location in Laos.

One day during this program, McGoff said she was out with a demining team in Phonsavan, Xieng Khouang Province in Laos. She watched how the team tediously worked to find and destroy the 80 million bombs, one by one. At the end of the day, they let her colleague click the button to detonate the bomb.

“I’ll never forget how loud it was,” McGoff said.

This was huge, she said. She felt privileged to share in this information as an American. As the team were leaving, the de-miners profusely thanking them for coming “all the way from America” to learn about UXO (unexploded ordnance). Then the de-miners said something she didn’t forget. “Let us remember that we love each other more than we hate each other.”

“That was the moment I decided I was going to do whatever it took to try and bring these wonderful people some justice—and I knew film was the best way to do it,” McGoff said. “I’m excited to see the good this film will bring and I hope that it can promote cross-cultural understanding and lead to a better future between the U.S. and Laos.”

The Indiegogo goal was surpassed with two days remaining on the campaign. That says a lot more than just reaching the monetary amount, she said.

“It shows that this documentary is important, it’s valid, and there’s an audience for it,” McGoff said. “The donations were overwhelmingly from American Lao diaspora, showing that they are ready for this story to be heard and for more Americans to know about Laos.”

McGoff said she is excited to move on to the next phase of post-production. She and her team are currently refining the editing process with motion graphics, titles and archive footage. The next phase will be to add the musical score from two-time Emmy-Award winning composer Jeremy Zuckerman, followed by additional sound design, she said.

McGoff said she plans to tour the film all of 2019 in the hopes of educating more Americans about Laos and starting a national conversation, but she has to raise funds to finish the film first. The fundraising campaign will end on July 6th at midnight. This film has been supported by The Pulitzer Center, NextPix, and World Without Mines.