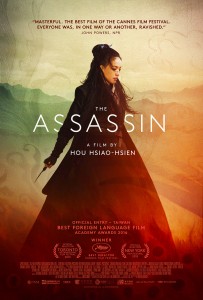 Qi Shu as Nie Yinniang in the Taiwan, China and Hong Kong film, “The Assassin” from Hsiao-Hsien Hou.

CALGARY (Nov. 18, 2015) — There is a scene in the film where the Assassin Nie Yinniang (Shu Qi) hides in the shadow, silently observing and overhearing her target Tian Ji’an (Chang Chen) share intimate talk with his mistress Huji (Hsieh Hsin-Ying). From the Assassin’s point of view, the camera lets us see them through a thin, translucent curtain swaying softly, at times blurry, and at times a bit clearer as it opens up.

That is an apt visual metaphor for the whole movie. As viewers, we are like looking through a swaying veil, getting glimpses of a story from scenes that are at times luminous, and at times, elusive.

Premiered at Cannes Film Festival this May, “The Assassin” earned the acclaimed Taiwanese auteur Hou Hsiao-Hsien a Best Director award. While the film did not win the coveted Palme d’Or, it was praised for its cinematic aesthetics and hailed as the most beautifully shot film at the festival. After an absence of eight years since his last work, his first French Language film “The Flight of the Red Balloon” (2007), and ten years from his last Chinese feature (“Three Times”, 2005), Hou comes back with a most anticipated masterpiece. “The Assassin” is now Taiwan’s official entry to the upcoming Oscar Foreign Language Film race.

A legendary story set in China’s mid to late Tang Dynasty (9th Century A.D.) “Nie Yinniang” is an early form of the wuxia (武俠) genre. Written in the classical Chinese language, it is not easily accessible to the general populace, who may not be as familiar with it as for example, “Journey to the West”. Consequently, viewers may find the plot lines in “The Assassin” hard to grasp, its multiple characters with similar names adding to the confusion. This is so even among Chinese audiences in Asia. I can see how much more difficult it is for non-Chinese speakers to follow.

Supplementary articles and in-depth commentaries on the film can be found  mainly in the Chinese language. But how many movie goers actually do research before heading out to the theater? So it is my intent that this article could help enhance their enjoyment of the film by dispelling certain foreseeable perplexities.

First off is the Chinese title of the film, “The Assassin Nie Yinniang” (刺客聶隱娘). Nie is the family name; Yin the middle word means shadowy, hiding, and Niang, a lady. Taking the name as a whole, our protagonist is like a female ninja. Yinniang is in a class of her own and definitely not a ninja. Stylishly dressed in black, Shu Qi has portrayed her enigmatic character with poise and finesse. Her nuanced reticence holds volumes.

The beginning of the end of the Tang Dynasty is marked by pervasive power struggles between the Imperial Court and renegade provinces, most prominent is Weibo where the story takes place. Weibo’s governor is the young Lord Tian Ji’an. While it may be an extended-family-run garrison, with Tian’s uncle holding important post, Lord Tian grasps full power and does not hesitate to abuse it to banish dissident officials.

As a child, Yinniang was betrothed to Tian Ji’an, her cousin. Later, Tian’s mother Princess Jiacheng (Sheu Fang-Yi) changed her mind and had her son marry for diplomatic purpose to maintain peace with the Imperial Court. From betrothed to betrayed, young Yinniang was taken away to the distant mountains by Princess Jiacheng’s twin sister, the Nun Jiaxin (played by the same actress Sheu), who becomes Yinniang’s mentor and Master, training her to be an expert assassin.

The film opens with a black and white prologue of Yinniang’s previous two missions. The first one depicts her easy taking-out of a corrupt official with her swift and clean maneuver of the dagger. The second mission however is aborted as she sees her target, another official, dozing off with his young son sleeping in his arms. Seeing the child, Yinniang cannot make herself to follow through with her mission.

Nun is not happy with this, thus assigning Yinniang the ultimate task, training her to fully master the way of the assassin with unswerving toughness. In an apparent siding with the Court, Nun sends her back to Weibo – after thirteen years now – to assassinate Lord Tian Ji’an, her once betrothed cousin. Herein lies the major conflict of the story, ironically in this wuxia film, a conflict that is internal, a tugging moral dilemma. We see an assassin who is reluctant to kill, a wuxia with a heart of gold, and a tender love which refuses to be snuffed out by the call of duty.

Shot in 35 mm film and framed in the boxy Academy aspect ratio, “The Assassin” reflects the minimal styling of Hou’s cinematic work, no fancy CGI or wired fight scenes but just the essentials. Even in the lavish abode of Lord Tian’s estate, the log-lined corridors, candlelit chambers, and natural garden all exude the beauty of simplicity. However, one notable exception is the costumes (Huang Wen-Ying). It is a fusion of classical, period styling with an elegant, contemporary touch. Very cool.

Hou’s storytelling is elliptical. It had been noted that the director had fully involved in the editing process and deleted many scenes that could have tied the plotlines and shown the back stories in a more explicit way. But he chose the minimal to avoid overt explanations. So the audience is left to connect the dots on their own. A viewer needs to watch the movie at least twice to get a clearer picture. Considering the film’s run time is only 107 minutes, Hou could have been a little more generous so to spare us some frustrating guess work.

However, what compensates for this shortfall is the main thrust of the film, the Hou style of cinematic aesthetics: his signature long takes to capture the fusion of atmosphere, mood and motion, static shots to allow viewers to absorb and savor, and the tranquil scenes of nature, distant trees silhouetted against the evening light, layers of mountains beyond hazy mountains, Chinese landscape paintings transposed onto screen. To complete the cinematic poetry, there are sounds of nature, calls of birds and crickets, the rustling of leaves, fluttering of flocks taking flight, quiet streams, rushing falls.

Director of photography Mark Lee Ping Bing has worked in many of Hou’s previous works, and a Cannes prize winner for Wong Kar Wai’s “In the Mood for Love” (2000) among his many awards. His long takes on locations in Japan and China’s Hubei province in “The Assassin” is a beautiful contrast with his camera following the Red Balloon floating up the Parisian urban landscape.

The only flashback in the whole movie depicts a crucial metaphor. Princess Jiacheng playing the zither tells the tale of a bluebird stranded in a foreign land. Birds only sing to its own kind. The rare bird in a distant land remains songless until a mirror is placed in front of it, triggering it to sing out its sadness until it expires. Yinniang later retells the tale to the mirror-making young man who nurses her wound, subtle and revealing at the same time.

As for the fight scenes, this is definitely not in the style of Wong Kar Wai’s “The Grandmaster” (2013), elaborate and focused, or Ang Lee’s “Crouching Tiger, Hidden Dragon” (2000) with its showy, mid-air ballet duel in a bamboo forest. Hou’s fight scenes are swift and short, few and far in between. Further, there is an absence of gore and blood, an apparent statement. Slightly scraping her opponent with her weapon shows that Yinniang could kill if she chooses to. Strength rests on the will of restraint; sparing a life is more powerful than taking it.

To those puzzled about who the masked woman in the duels is, here is the disclosure. She is Lady Tian (Zhou Yun), wife of Lord Tian, a disciple of the voodoo-practicing magician. The dots to connect? Their sharing of the news about Tian’s mistress Huji’s chicken blood trickery.

The last duel between Yinniang and Nun is the ultimate severing of the Master-disciple tie, for Yinniang has chosen her way, not submitting to prescriptive, obligatory duties, but creating her own path. The rare bird finally takes flight.

The Assassin is currently screening in selective theaters in North America and will be at Landmark Lagoon Cinema in Minneapolis starting Friday, Nov. 20.