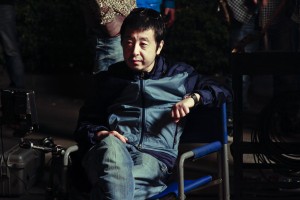 CALGARY (Sept. 25, 2015) — Chinese Director Jia Zhangke (賈樟柯) began appearing in international film festivals in 1997 and won The Golden Lion with ‘Still Life’ at Venice in 2006. Since then, Jia had solidified his reputation as he continued to garner frequent nominations at Cannes.

As a ‘Sixth Generation’ film director, Jia moves away from the epic, costume dramas made famous by Zhang Yimou into contemporary realism. In 2013, ‘A Touch of Sin’ won him a Best Screenplay award at Cannes.

While receiving international recognition for the film – a cinematic incision into the human costs of modernization and economic boom in China – it was banned in his own country. A cinematic social commentary, the film’s four narratives reveal the corruptions that oil the economic wheels, the breakdown of relationships, the alienation of youth, and the despair of a speck of a worker whose mounting pressures drive him to suicide. These stories are all based on real-life events in the news.

Jia’s most recent work ‘Mountains May Depart’ (山河故人) premiered at Cannes in May this year, and had its North American premiere at the Toronto International Film Festival two weeks ago. For this new film, Jia had received the good news that Chinese authorities had granted him the permission to screen it.

Here’s the rub. The fact that the film is allowed to be seen by the people may just mean that it is a tamer production and easier on the palate. That thought came to me intuitively. Upon watching it, my doubts were confirmed.

‘Mountains May Depart’ is divided into three sections, 1990, 2014, and 2025. The first part depicts a love triangle between a young teacher in Fenyang, Shanxi, named Tao (played by Jia’s wife and muse Zhao Tao) and her two suitor rivals, the ambitious gas station owner Jinsheng (Yi Zhang) and coal mine worker Liangzi (Jing Dong Liang). Tao later chooses Jinsheng, marries him, and gives birth to a son, whom Jinsheng proudly names Dollar. It was the 1990’s, the national obsession with wealth accumulation has its effects on everyman. The screen adopts the boxy Academy aspect ratio. 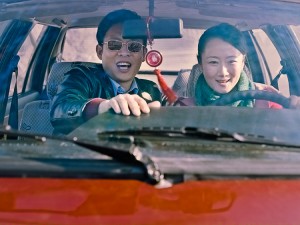 In the middle section, 2014, we see Tao divorced, and Jinsheng becomes a successful businessman in Shanghai with the sole custody of their son. Liangzi returns to the town, now married and with a child but is plagued with cancer from the dire conditions working in the mines all the years. In desperation, his wife goes to Tao to borrow money for his medical needs.

We also get a glimpse of the mother and son alienation as Dollar has been living with his dad in Shanghai. Later Tao’s father dies. She calls back seven-year-old Dollar to his grandfather’s funeral. Mother and son may listen to the same song by sharing one set of earbuds, they are too far apart to bond.

While the focus is on the relationships of these characters, there is, ironically, an absence of affective dynamics throughout. The narratives are superficially delivered and melodramatic, shots clichéd. The story is not unusual, like we have seen before, as Dollar says, déjà vu. Often we see the camera stay on long after it has made its point. The depiction of the internal worlds of characters as in Jia’s previous work is just not happening here. The aspect ratio has now increased to a wider screen.

The third segment is in the not too distant future, 2025, but far enough for us to see a totally different Dollar now grown up as a young college student (Zijian Dong) living with his father in Australia. Their relationship is rocky, to say the least, albeit not much is elaborated further to show the reason for the strain. Dollar goes to a Chinese class and strikes up an intimate relationship with his teacher Mia, played by Hong Kong star Sylvia Chang. Dollar brings Mia home as a translator to help him speak to his father, declaring his autonomy and freedom, a scene that might serve as a critique of the generation gap among overseas Chinese. 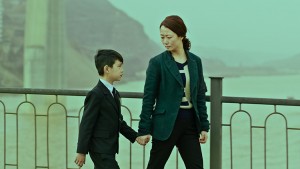 Zhao Tao in a scene with a young boy in director Jia Zhangke’s film ‘Mountains May Depart’. (Photo courtesy of Kino Lorber)

We soon see Mia and Dollar in bed together, ages apart like mother and son; the jump is unconvincing, the emotions contrived. While the dialogues are in English for this third section, I would rather hear them speak in their native tongues and read the subtitles. The lines are amateurish, the delivery, both in speech and acting, leaves much to be desired. The aspect ratio is the widest for this last segment of the film.

Trying to find some meaning for the gradation of aspect ratios, I surmise that the larger the screen, the deeper the problems the characters have sunk into, engulfed by their circumstances. The economic growth and currents of life have irreversibly swept them away from simplicity and innocence.

In the ending scene we see Tao again in her home in China, very much alone, but looks contented. The ending shot may be the best in the whole movie. In the falling snow, Tao dances to the music we hear at the beginning of the film, a disco scene where people moves with youthful vigor. Mountains may erode as years go by, but there are those who still remain as who they are, just like the Chinese title of the film suggests. Alas for those who still have not found themselves all this time.

Although it is well intentioned, Jia’s attempt at drama and relational rendering is mountains apart from his previous incisive and stylish work.