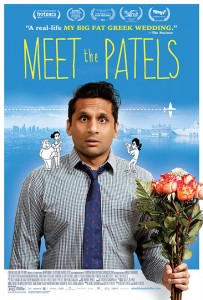 CALGARY (Nov. 2, 2015) — From the title, one can readily get the hunch that the movie is an Indian version of “Meet The Parents”.

That is partly true. “Meet the Patels” (4B Pictures LLC, Independent Television Service) is about finding the right one to marry and pleasing the parents as well. But take note, this is a documentary, and with the table turned. Now we have a pair of Indian parents finding a mate for their American born son Ravi, who is soon reaching the ripe old age of thirty.

Panic is in control mode, but it’s a constant undercurrent. To complicate the matter a bit more, Ravi has had a redhead American girlfriend Audrey with whom he has just broken off, a two-year dating episode that he has kept secret from his parents.

“Meet the Patels” won the Audience Awards for Best Documentary Feature Film at the L.A. Film Festival and both the Audience Award and the Founders Prize for Best Film at the Traverse City Film Festival in 2014. Ravi stars as himself, a real life actor looking for a real life mate. Together with his filmmaker sister Geeta, who follows him with her handheld camera almost everywhere, the siblings bring us a realistic, fun, informative and insightful documentary-comedy of finding a mate Indian style, more precisely, the Patels’ way.

We learn at the outset that Patels marry Patels, not as in incestuous practice, but just means the target market for looking for a potential spouse has a 50 square mile radius on the map of India where the Patels come from. So, following his parents back to India to jack up his chances make sense for Ravi. After breaking up with Audrey, he is willing to go along just to see what might happen, however doubtful he is.

The trip to India is a blast, but not a marital fast track. After coming back with no potential candidates, the parents send off multiple copies of Ravi’s ‘biodates’, resumés exchanges in a ‘biodating system’. Ravi meets several girls all over the U.S. and up in Canada, gets onto a few Indian matrimonial websites, and attends a Patel Matrimonial Convention, with Geeta in tow with her camera, just for the record.

The film is a fast-paced, multi-faceted visual delight, with real life characters playing themselves interfacing with lively animations at moments when the real-life personalities may deem too embarrassed to appear on camera. This is double fun. A mixed bag of cinematic concoctions, interviews, dialogues, and Woody-Allen style fourth-wall breaking self-confessionals make this a fresh way of filmmaking on a topic the siblings and their parents are bold enough to bring to the forefront.

Papa Patel came to America to study engineering in the 60’s. So we have a musical sequence bringing us back to the time. This is a pleasant and a necessary inclusion. For every immigrant family in North America, there are first-generation personal life stories of challenges, struggles, and fun, something parents would love to have their North American born children to embrace. The aspirations and persevering spirit of these pioneer immigrants could well keep their children grounded and their identity strengthened.

The film is clever in its presentation, offering a fusion of documentary and narrative form. Underneath the humor and fun belies a more serious vein. In the guise of a comedy, the directing siblings explore the pressures traditions and customs lay upon adult children, and their parents as well, the expectations to marry off their children and have them in turn raise children of their own. Marriage for what purpose though? Love? What is love anyway? And, how do we know we love somebody? Most importantly, and maybe hardest of all, how to find that right person?

This set of questions though may sound very simple to Ravi and Geeta’s parents. Marriage was arranged for them by professional matchmakers. It’s scientific, they claim, as the data of two lives are compared and matched to make sure they are compatible in class, in education, in interests, in personalities. They are happy about such arrangements, and so are their friends. Love will eventually come. Things will work out fine.

“Meet the Patels” is a film that would prompt resonance in viewers from all cultures and traditions, for the subject matter, marriage and the family, the human quest for love and relationships have universal appeal. And the conclusion is what makes this film all the more gratifying: for any loving parents, their main hope for their children is for them to be happy, a heart-warming note to end.

Now showing at selected cities across North America. In Minnesota, at the Landmark’s Edina 4.