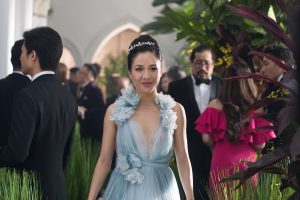 You’ve probably heard by now. “Crazy Rich Asians” is the first movie in a contemporary setting with an all Asian cast since “The Joy Luck Club” was released 25 years ago.

There were “Crouching Tiger, Hidden Dragon” (2000) and “Memoirs of a Geisha” (2005) but they were period movies. What’s more, “Crazy Rich Asians” is a major studio production that showcases Asian Americans and Asian Brits in the leads, directed by Asian American Jon M. Chu (“Now You See Me 2”, 2016), based on the international bestseller by Singaporean born American author Kevin Kwan.

All of the above are in themselves monumental, and hopefully game-changing for Asian-American filmmakers and actors. However, if the movie is not worthy of the buzz, or if it does not deliver, such a production will be like a pretty red pocket envelope (‘lei see’) that’s empty inside.

So, to all who so highly anticipate the arrival of “Crazy Rich Asians”, all the fans of Kevin Kwan’s popular trilogy, and all who hope to see a positive trajectory for Asian Americans in the film industry from here-on, you may let out a big sigh of relief, for “Crazy Rich Asians” delivers as a feature, a solid book-to-movie adaptation, and a competent rom-com not just with glamor but substance as well.

“Crazy Rich Asians” is effective because it resonates regardless of the viewers’ race or cultural background, it reaches out across borders and boundaries. One can see that in reviews from non-Asian critics, and for me, I saw it in the audience response in the theater. It can make you laugh or moisten your eyes even though you have no ties to anything Asian at all. We can relate because we are all born into a family, brought up by parent(s) or any person taking that role, and share the need to be connected by love. We have made friends, and for some, foes; heaven forbid if one of the latter is one’s mother or mother-in-law.

Rachel Chu, aptly played by Constance Wu of TV’s “Fresh Off the Boat” series, is an economics professor at NYU, brought up by a single mom in California, falls in love with fellow NYU academic Nicholas Young (Henry Golding, in his debut film and a definite rising star now). Unbeknownst to her, Nick is Mr. Darcy incognito. Rachel soon finds out as Nick brings her back to Singapore to meet his family and attend his best friend Colin Khoo’s (Chris Pang) wedding. The Young family had developed the island’s real estate for over a century, and Nick is like the Prince Harry of Singapore.

From the beginning, director Chu takes us on a guided tour of the beauty and modernity that’s Singapore. As well, he unfolds the opulent setting of the Young family estate with a touch of mystery. It is home to the matriarch Ah Ma, Nick’s Grandma, played by Lisa Lu, who starred in “The Joy Luck Club” (1993), and at 91, must have felt the defining moment she is in.

Nick’s mother Eleanor, a nuanced performance by the perfectly-cast Michelle Yeoh (“Crouching Tiger, Hidden Dragon”, 2000) is the gatekeeper of her son’s future marital affair. She and Rachel will have lots of open and covert warfare. From restrained exchanges to outright insults, the tension is well played by both. The Mah-jong match close to the end is a symbolic victory for one of them. Yes, one might seem to have won, but that is made possible only by a higher move with a nobler intention from the other. Excellent play there. 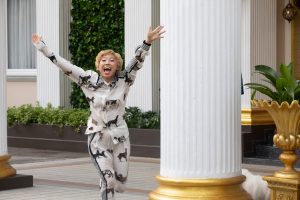 Rachel is not alone, fortunately. Nick’s cousin Astrid (Gemma Chan, another definite rising star) is an ally in morale if not in actual help, as she herself is bogged down by her own marital problem with her husband Michael’s (Pierre Png) affair. A self-made man married into the powerful family of old money, Michael sarcastically declares himself a ‘commoner’. Although bound by the numerous characters and the two-hour time, the movie does show the troubled relationship between the two, albeit the book will be a good place to go after the show for admirers of Astrid to delve deeper into her story.

Rachel’s quintessential friend and confidante is Peik Lin Goh, hilariously played by comedian-rapper Awkwafina (“Ocean’s Eight”, 2018). She is Rachel’s college buddy who had gone back home to Singapore after graduation. Peik Lin helps Rachel navigate the hostile and uncharted waters of the Young family landscape. She is another reason why the movie is such a feel-good, gratifying delight. Her eccentricities might make you laugh, but her loyalty will move you.

Actor/comedian Ken Jeong (TV series “Dr. Ken”) plays Peik Lin’s dad, Wye Mun Goh, another spot-on casting. The audience started laughing just by looking at him even before he starts to speak. Mother Goh (Chien Mun Koh) is fantastic with her Singaporean accent and elaborate expressions while the brother (Calvin Wong) balances with deadpan fun. The dining scene in the Goh family loosens up audience’s guarded attention from the opening part of the movie, maybe not unlike Rachel’s own psychological state.

Ever since Kwan’s first title of the trilogy “Crazy Rich Asians” was published in 2013, there have been those who avoided it and now the movie adaptation simply because of the title. What’s in a name? It should be quite obvious that such a book title is intended to be satirical. That Nick has been hiding his wealth and privileged background in order to woo Rachel tells exactly the opposite of what the book/movie title conveys. Here are two grounded, sane and modest human beings falling in love with each other; the incendiary lies with one family being rich, or crazy, or crazy rich, setting up intimidating obstacles to prevent their courtship and marriage.

What’s a rom-com without an actual wedding scene? Here we see director Chu’s masterful set-up of Colin Khoo and Araminta Lee’s (Sonoya Mizuno) wedding, heartfelt, elegant, and yes, tastefully spectacular. The parallel shots of the bride and groom and the pair of hopeful lovers are tender and heartwarming. For some reasons, the emotional power of that Elvis song never fails. “Like a river flows…” has its visual representation. I must admit, it is one of the most impressive cinematic weddings in my memory. As the scene concludes, the non-Asian gal down my row was fist pumping.

Indeed, underneath all the spectacles, the contrast of materialism is unabashedly depicted by the love Rachel and Nick have for each other. What more, the movie has also brought out the bond between mother and daughter, Rachel and her mother, the single, immigrant mom (Tan Kheng Hua), a self-made woman having raised a strong, smart and independent daughter on her own terms. The two giving us some moving moments.

Surely, “Crazy Rich Asians” is just one story. The casting in itself just shows how diverse even the umbrella called ‘Asian’ is. There are many more nationalities and cultural identities not present here in this movie, or in Kwan’s books. It is impossible for one work to represent all, and any attempt would only be reductionistic. No matter how much diversity the movie adds to  Hollywood, there are many, many more stories waiting to be told. Hope we don’t need to wait for another milestone decades in the making.