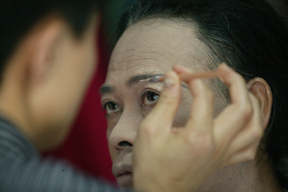 A group exhibition of contemporary photography from The People’s Republic of China, curated by Gu Zheng and A. D. Coleman, will run from August 2-25, 2011 in the Katherine E. Nash Gallery of the Regis Center for Art, University of Minnesota, 405 – 21st Avenue South, Minneapolis. The Opening Reception will be held Thur., Aug. 11, 5 to 7:30 p.m. Gallery hours are 11 a.m. to 6 p.m., Tues. through Sat. All events at the Regis Center for Art are free and open to the public.

Each has undertaken the creation of a long-term documentation of one or more aspects of Chinese culture that reflects something vital about China now — whether that is something emerging or something vanishing. Collectively, these photographers have numerous publications, exhibitions, and awards to their credit, but until now little of their work has appeared outside mainland China.

Six of the seven — Chen Yuan Zhong, Hua Er, Jia Yu Chuan, Yang Yan Kang, Yu Haibo, and Zhang Xinmin — are based in Shenzhen. Just across the border from Hong Kong in southern China, Shenzhen was the first of the Special Economic Opportunity Zones established by China in the post-Mao era, as magnets for entrepreneurs and educated people in all fields.

In 1980 Shenzhen was a fishing and farming community with a population of roughly 20,000. Today it is a world-renowned center for printing and information technology among other industries. Shenzhen is a booming 21st-century metropolis.

The residents’ average age is 30 years and the population exceeds 13 million people. As such, it serves as a microcosm revealing many of the dramatic cultural, political and demographics shifts in contemporary China.

The exhibition’s organizational structure moves from the rural scene to the metropolitan context, echoing developments in China today. While some of these photographers focus on aspects of life in their home city, others look at situations outside of Shenzhen.

Their themes include rural Catholicism, matrilineal culture in an agrarian setting, the population shift from country to city, prostitution, gender and identity, typologies of urban citizenry, and the emergence of a thriving pop music/club scene as an index of internationalization. The exhibition includes 150 photographs and is equally divided among the seven participating photographers. 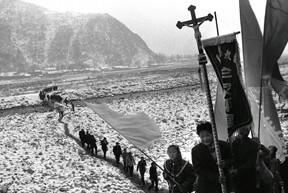 These include studies of Tibetan life and the project excerpted here: a scrutiny of life in a small Catholic village in the Yellow River area of Shaanxi province of north China.

Yang has visited this area repeatedly over the past decade, familiarizing himself with the ways in which these people’s religious convictions — presently tolerated, previously oppressed — weave through their daily lives. Born in Guizhou province in 1954, Yang is a member of the French picture agency VU. In 2001 and 2002 he was named one of the ten best photographers in China by She Ying Zhi You magazine.

Hua Er: Mother to Daughter, is an independent anthropologist who has concentrated her attention on a matrilineal culture of long standing, a rare phenomenon in Chinese society.

Located in Lijiazui, a village situated between Tibet, Yunnan province, and Sichuan province in southwest China, this clan-based matriarchal social structure removes men from any direct involvement with their own children, shifting their familial roles to emphasis on their relationships as uncles to their sisters’ children.

The marginalization of men and the empowerment of women are the main themes of Hua’s study. Hua supports herself as a freelance writer on assorted subjects.

Zhang Xinmin: Country to City, is about escaping from the drudgery of peasant life to the metropolis and the dream of China’s booming economy, and more about wht it represents as upward mobility has become increasingly possible, but undependable.

Zhang Xinmin, long-time staff photographer for a Shenzhen newspaper, has persistently tracked the transition of working-class Chinese, most of them former farmers and agricultural workers, revealing the details of their individual struggles for survival and success in this new environment. Born in 1952, Zhang is now Visual Supervisor for the Shekou News, a daily in Shenzhen, a position he assumed in 1994.

Chen Yuan Zhong: Young Pros, Oldest Profession, is about prostitution, once easily policed in the countryside, is has now become a fact of life in urban settings everywhere.

In a city like Shenzhen, where residence permits require legal employment, prostitutes, pimps and their customers play a risky age-old game of hide and seek with the authorities. Chen Yuan Zhong follows the trail of this illicit trade from the streets and the daily life of sex workers through police raids, the court system, prison, and efforts at rehabilitation.

Born in 1970, Chen is Picture Director for the Shenzhen Evening News. In 1998 he was selected for participation in the month-long Joop Swart Master Class at World Press Photo in Amsterdam, the Netherlands.

Jia Yu Chuan: Bending Gender, is about urbanization and how it has provided personal and social options not readily available in rural contexts, including the creation of such microcultures as the transvestite-transsexual community of Shenzhen that Jia sympathetically observes in this series. The pictures investigate his subjects’ private lives, their process of self-transformation, and their self-presentation in public.

Born in Chongqing Municipality in 1961, Jia graduated from the Journalism Department of Wuhan University in 1999, and now works as a staff photographer for a Shenzhen newspaper group. He has won several national awards for news photography.

Li Nan: Urban Identities, concerns the social types in China’s cities. And like Neal Slavin, he seeks meaning in the ways that people present themselves publicly in groups.

In this series of formal, posed group portraits Li surveys clusters of city dwellers — from chicken pluckers to Party officials, and from construction workers to opera singers — consciously registering their appearances for posterity in his images. 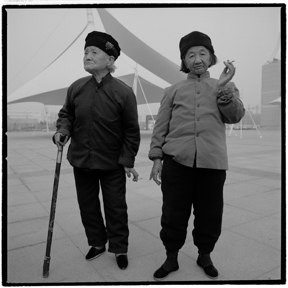 Born in Jinan City, Shandong province in 1961, Li Nan is a staff photographer for the Dazhong Daily. He has won many awards both inside and outside China, including first prize in the Art category from World Press Photo in 1996.

Yu Haibo: Night Moves, features this staff photographer for the Shenzhen Economic Daily, who also pursues his own photographic interests when not on the job. In this suite of dramatic color images he explores the contemporary pop music scene in Shenzhen, with its rock musicians, club kids, mosh pits, and riotous environments — an increasingly common feature of urban culture worldwide.

Born in Henan in 1962, Yu won the China Photojournalists’ Golden Eye Prize and the second prize in the Arts and Entertainment category from the 2005 World Press Photo Awards in Amsterdam, the Netherlands.

Curator Gu Zheng was born in 1959, and is a photographer, critic, historian, curator, and educator. As an Associate Professor in the School of Journalism at Fudan University in Shanghai, he serves as Vice-Director of the university’s Research Center for Visual Culture.

Zheng has been in contact with American photography since the middle of the 1970s, when he resided in the U.S. A long-time friend of the historian of photography Beaumont Newhall, he studied under him at the University of Albuquerque in 1979. Gu has published numerous books of his own writings on photography, and in 2001 received the Chinese Photography Golden Figure Prize in Theory and Criticism.

In 2001 and 2003 he was honored with an Art Critic Awards from the Association of Chinese Literature and Art. Additionally, Gu has translated into Chinese many texts on photography, from classical to postmodern. He has curated several group exhibitions of Chinese photography for venues in China, South Korea, and the United States.

Curator A.D. Coleman is a prolific writer of photography history and criticism who has published widely since the 1960s. Born in 1943, he is based in New York City. During the 1960s and 1970s, Coleman was a regular columnist for the Village Voice, Popular Photography, The New York Times and Camera 35.

His books include The Grotesque in Photography (1977), Light Readings: A Photography Critic’s Writings (1979), Critical Focus: Photography in the International Community (1995) and The Digital Evolution: Photography in the Electronic Age, Essays, Lectures and Interviews, 1967-1997 (1998). Curatorial projects include Testimonies: Photography and Social Issues (Houston Fotofest International 1990) and SAGA: The Journey of Arno Rafael Minkkinen (FEP, 2005, co-curated with Todd Brandow). He received the first Art Critic’s Fellowship ever awarded in photography by the National Endowment for the Arts in 1976, and a major Hasselblad Foundation Grant in 1991. A Fulbright Senior Scholar in Sweden in 1994, he received the prestigious Kulturpreis der Deutschen Gesellschaft für Photographie (The Culture Award of the German Photographic Society) for 2002.

A related exhibitions, “Transitions”, is an exhibition of photographs by high school students in the Twin Cities metro area, will be presented in the Quarter Gallery also located in the Regis Center for Art. Gallery hours: August 2-25, Monday-Friday, 8 a.m. to 5 p.m.

The exhibition is co-sponsored by the Katherine E. Nash Gallery, the University of Minnesota College of Liberal Arts, the Institute for Advanced Study, the Institute for Global Studies, the Confucius Institute and individual donors. Organized by the Foundation for the Exhibition of Photography.The Katherine E. Nash Gallery is strongly committed to exhibiting works of art in various media by diverse artists from the University of Minnesota as well as regional, national, and international sources; providing a venue for the required MFA Thesis exhibitions; creating an accessible environment for University of Minnesota Department of Art faculty to exhibit works of art; educating and engaging University of Minnesota students and the public in the visual arts; giving University of Minnesota students the opportunity to work and gain experience in arts administration, curatorial planning, preparation, and the daily operation of a professional gallery through the Department of Art; encouraging dialogue between artists and the community; representing voices from all varieties of gender, ethnic and cultural backgrounds. http://nash.umn.edu/