ST. PAUL (Oct. 8, 2013) — Immediately upon arriving to the Ordway Theater in St. Paul, chants from protesters filled the air. People protested gathered peacefully to demonstrate against the Ordway Theater’s decision to invite, Ms. Saigon to town.

Protesters perceive the content encapsulated in Ms. Saigon to hold dangerous stereotypes and racist depictions of Asians. Some Asians and community members worried that this performance may further hinder progress towards deconstructing racism.

Earlier today, I observed Congressman Keith Ellison on the news in Washington, D.C. He was arrested for peacefully protesting against current immigration policies. He, along with his constituents communicated dissatisfaction about unacceptable and racist immigration reform policies and laws. I was inspired to see well-organized groups fighting for issues related to equality and civil rights.

Congressman Ellison, similar to the protesters at the Ordway, believes that everyone should experience equality. Courageously and peacefully, they picketed to demonstrate messages, which communicated, “All kinds of systems, locally and globally continue to perpetuate prejudicial stereotypes, ethnocentric images and racism.” The messages seem clear, “Don’t support systems that aren’t working to deconstruct racism because racial prejudice hurts everyone.” 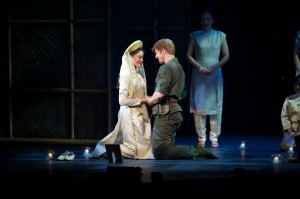 I found it impressive that both groups of people were able to come together to peacefully protest convictions that support anti-racism efforts as one way to reduce oppressive laws. As most of us know, organizing is hard and often unappreciated work. So, when I see a successfully organized protest, I respect the work, time and energy that went into the effort.

In fall of 2012, I interviewed Congressman Keith Ellison before he was re-elected into congress. Ellison stated, “People need to organize so that every voice matters and every voice counts.” I admire the tenacity of this belief, which guides many who seek racial equality. I was reminded that Minnesotans are politically aware, active and engaged, which I was proud of.

Weeks leading up to Ms. Saigon, I purposely chose to not read reviews or media releases about the production. I intentionally decided to avoid being influenced one way or another. I do this with most shows/plays I review and write about.

Ms. Saigon told a painful story that most of us know all too well. War creates havoc in the lives of men, women and children. It tears us apart, drains us economically and has life long implications. The impact of war means that some people post-war time, may struggle with lifelong: anxiety, depression and post-traumatic stress disorder (PTSD). The story of, Ms. Saigon grew out of the impact of the Vietnam War, which took place between 1955-1975.

The dancers were amazing and flawless. The vocalist’s powerful voices beautifully surrounded the audience. The vivid and dazzling sets were bright, creative and illuminating. I was impressed by the true to life props, intricately timed choreography and exceptional acting. Many times throughout the show, tears swelled in my eyes. Emotionally, I could relate to various indirect aspects of the story’s characters and what they seemed to be experiencing. While stereotypical towards Asians to the nth degree, Ms. Saigon told a story which was deeply moving and poignant. Throughout the entire production I was in awe of the quick, yet engaging tempo, along with smooth transitions from one scene to another.

While Ms. Saigon was overwhelmingly packed with powerful talent and remarkable abilities, the show depicted very narrow and distorted images of Asians. Asian women were primarily cast in roles that were passive, characterlogically prostitutes, women seeking asylum to the United States and women who were emotionally detached from their origin of birth. More than this, Asian women were depicted as totally dependent on American military men and completely incapable of making decisions. I would imagine that any racial group possesses some of these qualities to some degree. But painting a broader and more inclusive picture is also important.

Ongoing multimedia productions too often stereotype and overly pathologize Asians as having one narrative account. This teaches the greater public that in the year 2013, Asians have not progressed. We continue to be defined by pop culture, versus real life modern accounts of painful journeys, accomplishments, and success. Like every racial group, we hope that one day the public at large understands that in as much as we are part of a collective group, we are also unique, special and individually nuanced.

The performance was extraordinary. I was elated to see such amazing talent among a diverse group of Asian performers. It reminded me that living between two worlds is both complicated and a gift on any given day. As we continue to work towards bridging culture chasms, it’s important that communication include deep listening. Even more so, we need to continue kind and respectful dialogues and realize that progress, while rarely graceful, can be made.

Should the Ordway have passed over the opportunity for St. Paul to host Ms. Saigon? Did protesters have a relevant point requesting that ethnocentric and racist shows be discontinued? I imagine we will have many more conversations about this topic. I’m grateful that both sides pushed us to reflect differently, engage towards building multidimensional perspectives and carefully consider polarizing views.

Like most conclusions I’ve arrived at, they were not absolute, but instead fluid. Sometimes, challenging views are a gift. I believe that the controversy between protesters and the Ordway created a level of intriguing dialogue. It resulted in unforeseen interest, peaked curiosity and meaningful discussions. When we ignite new questions, answers don’t always come as quickly as we’d like. However, I would submit that we all benefit and grow.