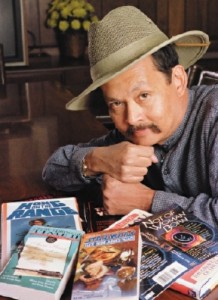 Wu has published over a dozen novels, including the six-volume YA series “Isaac Asimov’s Robots in Time” (Avon). He is best known for the science fiction-Western novel Hong on the Range (Walker, 1989), adapted into a comic book trilogy for Image Comics (1997).

“We’re very excited to bring him here,” said Eric Heideman, who coordinates the Speculations Reading Series. “His work has an exceptional range, with a great deal of humor, history and genre bending, especially in his novel, Hong On The Range.”

Wu has written over 50 short stories for such markets as Analog SF (with Rob Chilson), Asimov’s SF, Amazing Stories, Omni, Twilight Zone Magazine, and Pulphouse. He was also featured in the anthology series Borderlands, Wild Cards, and Tales from Jabba’s Palace, and his story collection, Wong’s Lost and Found Emporium and Other Odditties, (the title story was made into a Twilight Zone episode).

A resident of Southern California, Wu holds a Ph.D. in American culture, and published the nonfiction book, The Yellow Peril: Chinese Americans in American Fiction, 1850-1940 (1982), and essays on the “yellow peril” in speculative fiction and “Science Fiction in China: Producing the Model ‘A.'” He has taught college writing classes and led creative writing workshops for writers of all ages. His collection of Jack Hong stories from Pulphouse is now available as an ebook.

The Loft Literary Center is the nation’s largest independent literary center. The Loft supports the artistic development of writers, fosters a writing community, and builds an audience for literature. Thousands of students register for Loft creative writing courses each year; thousands more participate in Loft readings and other events, including the upcoming Lao American Writers Summit in August.

The reading is free and refreshments will be available.