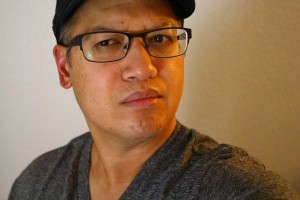 SEATTLE (July 25, 2015) — A year ago, Vietnamese American author Kevin Minh Allen released his debut book of poetry. “My Proud Sacrifice” from Goldfish Press. The collection embodied over a decade of his writing, blending history, art and memory to question what we document, what we forget, and how we move forward, especially as a mixed-race Vietnamese adoptee.

You can learn more about “My Proud Sacrifice” on Facebook and online at Tumble. We had a chance to discuss his collection a year later and what his journey as a poet has meant for him.

Asian American Press: Tell us a little about yourself, and how did you develop an interest in writing?

Kevin Minh Allen: I had no idea, there was no inkling in my mind as a child, that I would be a writer. Growing up, I knew I loved to draw and read, but writing as a creative outlet didn’t cross my mind. I guess the first time I wrote anything at length was when I wrote to my few pen pals in Germany when I was 12.

It was in college that I began to write poems, mainly because I took a major interest in the local open mic spoken word scene. A confluence of internet technology and television media in the mid-to-late ‘90s opened my eyes to other poets all over the country as well as vibrant spoken word scenes in places like New York City and San Francisco and Seattle. They laid the groundwork for my interest and interaction with poetry and poets, and gave me encouragement to try my own hand at writing poetry. 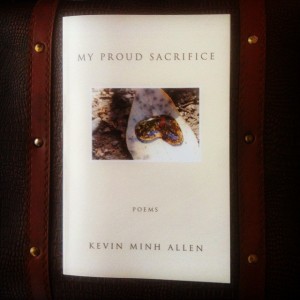 I was never classically trained in poetry; I’m aware of some of the forms, terminology, and schools/genres of poetry, but I eschew them in order to write what I want to write and how I want to write a poem. I have an inner life, a contradictory mentality, and an internal rhythm that do not conform to traditional or conventional poetics. I also don’t attend workshops, mainly because of a couple odd and underwhelming experiences I had in the past with them.

AAP: How did “My Proud Sacrifice” come about? What was the most difficult thing about putting this together?

KMA: Since the late ‘90s, I have had numerous poems published in various publications, both on paper and on websites, and friends would encourage me to collect these poems and have them published in a book.

At first, I tried my hand at making my own little chapbooks by formatting, designing, copying, and stapling sheets of colored paper together and then folding them into a simple booklet. It was satisfying just for the fact that I was doing something for myself and I had something that I could talk about and share with my friends. I also liked the feeling of following in the anarchistic tradition of disseminating literature that paid no attention to the mainstream.

When it came time to seriously contemplate looking for a publisher to even consider my manuscript worth publishing, my life situation and outlook were primed to accomplish this task. “My Proud Sacrifice” came into being primarily out of spite for the few people who were once very close to me but also discouraged me from publishing a book of poetry for whatever reason(s) they had at that time. Thus, it took me an even longer time to muster up the courage to go through with having my own book published. I finally wanted a proper book, a fresh start, evidence that I mattered in my own life.

AAP: What’s a poem you’re particularly proud of in this collection?
KMA: “Playroom.” So much is both contained and exploding from it that it’s hard to wrap your mind around it, I think.

AAP: What are some of directions in Southeast Asian literature you still feel are unexplored? Where are we seeing significant innovations? What are some key stereotypes you think still need to be challenged?

KMA: One of two themes that comes to mind, based on my personal experiences, which are ripe for exploration, are people of the Diaspora(s) who have no memory, or very limited memory, of leaving the countries they were born into and subsequently were raised in communities that are completely foreign to the ones they were taken out of, and then they travel back to those original countries to reunite with someone or something, or simply re-emerge as another person who must come to terms with a past that never was or is uncomfortably murky.

The second theme is based on the idea of people of the Diaspora(s) meeting and interacting with one another in other countries in which they have fully (or partially, or not at all) assimilated or were born. Years ago, I started writing dialogue for a play that involves an American man who was adopted from Vietnam as a baby who visits Berlin and befriends a Vietnamese man who illicitly sells cigarettes near subway stations. The play revolves around the (historical) circumstances of how they got to where they are and where they may be headed, and how their two shared ethnicities/national origins coincide but invariably deviate from each other. I guess this reflects that popular SE Asian aphorism, “Same-same but different.”

Some key stereotypes about, or among, SE Asians that I think can either be challenged or re-invented or subverted are “straddling two worlds,” “landlessness/homelessness/nation-less,” “upholding traditions,” “generational conflicts,” “ancestor worship,” and “assimilation into so-called dominant cultures/nationalities.”

AAP: As a writer, when are you most satisfied with a piece?
KMA: Unfortunately, I’m rarely ever satisfied with a poem or any other piece of writing I “finish.” There are few poems in my oeuvre that remain untouched.

AAP: What’s the best compliment you’ve received for your book so far?
KMA: Actually, all of them have been the best because I’m just savoring the “newbie” status of having my first book published.

AAP: What’s next for you?
KMA: More books of poetry, plays, screenplays, and a political biography of Nguyen Van Thieu.